Everything You Need to Know About High-Deductible Health Plans

No one has ever accused the healthcare system of being easy to navigate, but it seems Americans feel even less confident in their ability to understand health insurance than one might expect. In a 2021 survey of 2,000 Americans, more than 90% of respondents said they felt moderately capable of moving through the healthcare system, yet 56% would consider themselves “completely lost” when trying to figure out health insurance.

This issue impacts employers directly. More than 55% of Americans get their health insurance through their employers rather than via Medicare, Medicaid, or individual private health insurance. If employees don’t understand the details of their plans — what counts toward their deductible, what constitutes in-network and out-of-network care, etc. — there’s a good chance they won’t maximize their employer-sponsored benefits. And they’ll pay the price both financially and medically.

Since 2010, family health insurance premiums have grown twice as quickly as wages. When people are forced to choose between their physical and financial health, they frequently opt for the latter. A survey from Bankrate found that almost one-third of American families have delayed medical care due to prohibitive costs. It’s been well-established that healthier employees are happier employees. When workers are able to prioritize preventive care, they can bring their best selves to work; when they don’t have that ability, absenteeism and presenteeism rates increase.

What’s more, many employees don’t even know what they’re signing up for during open enrollment. One study revealed that confusion about health insurance causes consumers to buy more coverage than they need, while nearly a quarter of folks with employer-sponsored plans are considered “underinsured.” With that in mind, HR teams need to educate employees on the world of insurance to ensure they’re sufficiently protected.

But considering the vastness of the health insurance landscape, we’re dedicating this post to a growing trend in the insurance world: high-deductible health plans. We’ll explore what HDHP coverage looks like, how health savings accounts (HSAs) fit into the equation, the pros and cons of HDHPs, and how HDHPs could evolve in the future.

What Is HDHP Insurance?

The term “high-deductible health plan” can sound a little intimidating, especially for anyone worried about the ever-increasing cost of medical care. Yet over the past five years, HDHP insurance enrollment has increased by about 43%. In 2019, more than half of the U.S. workforce had HDHP coverage.

These plans have gained popularity due to their cheaper monthly premiums and reduced health insurance coverage costs for employers. Average annual premiums for workers with HDHP coverage are 36% cheaper than those for workers who are on plans with lower deductibles. In exchange for reduced upfront health insurance costs, however, HDHP plan participants must pay more out of pocket for medical costs before their insurance kicks in (hence the high deductible).

Per the IRS (which sets yearly limits for minimum deductibles and maximum out-of-pocket amounts), HDHPs have deductibles of $1,400–$7,000 for single people and $2,800–$14,000 for families. If this sounds like a lot of money, that’s because it is — especially when you consider that nearly 40% of Americans say they wouldn’t be able to cover an unexpected $400 expense. The good news is that you can help your employees clear HDHP cost hurdles and avoid paying for coverage they don’t use.

First and foremost, it’s your job to guide them through the maze of health insurance by helping them understand exactly what’s included under HDHP coverage. There are specific services — including vaccinations as well as preventive screenings like mammograms and colonoscopies — that health plans must cover at no cost, even if an employee hasn’t met their deductible. Yet one study found that only 20% of employer-sponsored plan participants knew that such screenings were exempt from deductibles. Keep your employees in the loop so they don’t forgo or delay preventive services that could save their lives and greatly reduce future care costs.

As a bonus, Americans who are enrolled in HDHP insurance have the option to contribute funds to a health savings account (HSA). By opening an HSA, HDHP enrollees can funnel pretax money from their paychecks to cover qualified medical expenses and reduce their taxable income. If the amount of money an enrollee contributes annually to their account exceeds their healthcare costs for a given year, the account balance rolls over and can build over time. That HSA can continue to grow until the account holder needs to tap into those funds to cover deductibles, copays, and other related costs.

Unfortunately, HSAs aren’t always the harbinger of health equality that they claim to be. For instance, an HDHP enrollee who barely breaks even every month probably can’t justify taking money out of their paycheck to contribute to an HSA — even though it offers many long-term benefits. And even if they can contribute some funds, it’s probably not enough to cover their out-of-pocket medical costs; this means their HSA won’t be able to grow, and they’ll miss out on the tax benefits. About 80% of employees with HDHP coverage say the money in their HSAs wouldn’t be enough to handle even one year of out-of-pocket medical costs.

The annual contribution limits of HSAs present another obstacle. While individual contributions currently cannot exceed $3,600 (with families capped at $7,200), the IRS earlier this year announced that contribution limits for 2022 will increase by $50 for individual coverage (to $3,650) and by $100 for family coverage (to $7,300). Meanwhile, average out-of-pocket costs for families have increased by 71% over the past decade and show no signs of slowing down. It’s easy to see how a family might find itself belly up if faced with an unexpected health emergency.

Employers looking to boost those overall account balances can match employees’ contributions to their HSAs, but that’s not always feasible for smaller businesses or startups. In these cases, it makes a ton of sense to pair a benefit like Paytient with an HSA.

Because Paytient works alongside your existing employer-sponsored plan, HDHP enrollees can still contribute to their HSAs. But instead of withdrawing HSA funds to pay for out-of-pocket medical expenses, employees can swipe their Paytient card at the time of care. We cover the immediate cost, and employees can set up a payment plan that’s free of any interest or added fees.

As we continue to explore the pros and cons of HDHPs, it’s a good idea to compare them to another common employer-sponsored health plan option: preferred provider organization (PPO) plans. While an HDHP has a high deductible and a lower premium, PPOs offer lower deductibles and higher monthly premiums. Additionally, those enrolled in PPO plans are not eligible to contribute to HSAs.

But even in these situations, it’s important to keep your employees apprised of their options. After all, a PPO isn’t automatically a better option for those with chronic illnesses. A federal rule enacted in 2019 strengthened care and lowered costs for those enrolled in HDHPs by reclassifying certain medications and services used to manage chronic illnesses (like heart disease, diabetes, and asthma) as covered preventive care benefits. As with preventive screenings and vaccinations, insurance foots the bill even when enrollees have not met their deductibles.

From a cost perspective, reasonably young and healthy employees can benefit from enrolling in HDHP insurance options — especially if they have a way to pay for out-of-pocket expenses without draining their HSA account balance. When paired with Paytient, HDHPs are the most cost-effective health plan for most people; after implementing Paytient, one employer saw its HDHP insurance adoption jump from 50% to 85%, which led to a return 12 times larger than the initial investment.

To get into the nitty-gritty cost details, check out this breakdown of HDHP vs. PPO annual savings. 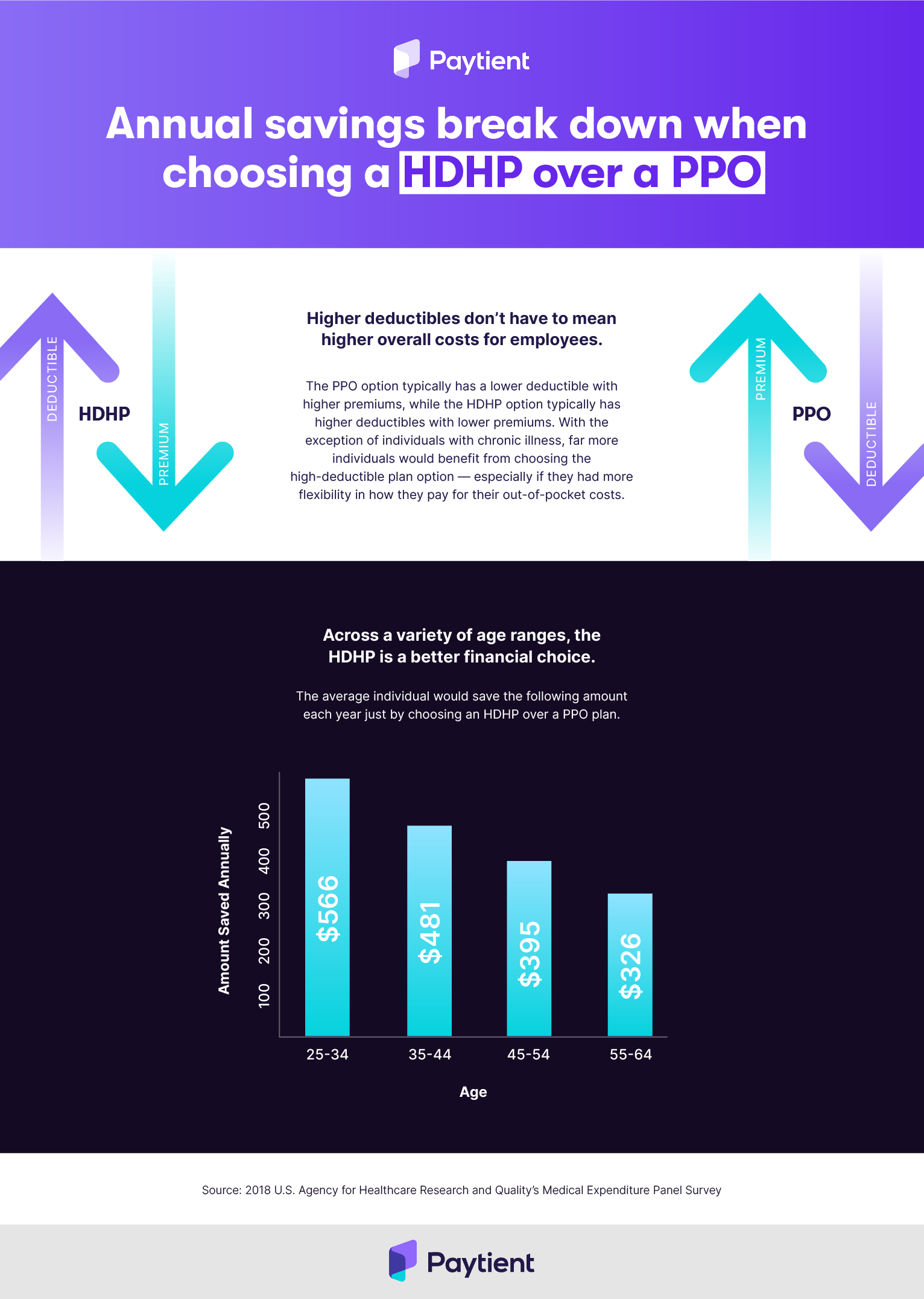 Ultimately, insurance coverage is highly individualized. But when you have all the information you need, you can better advise your employees about which options make the most sense for their circumstances.

What’s Next for HDHP Coverage?

As with most things in U.S. healthcare, HDHP insurance is sure to change over the coming years — especially as we emerge from a generation-defining pandemic. We’ve already seen the effects of COVID-19 on HDHP insurance; shortly after the initial lockdown in March 2020, the IRS issued Notice 2020-15, which required HDHPs to fully cover COVID-related medical costs before enrollees hit their deductibles.

This is exactly the kind of information you need to share with your employees! The last thing you want is your employees delaying care because they’re misinformed about the extent of their HDHP coverage. We don’t yet know how else HDHPs will evolve, but they’re definitely here to stay.

According to the Centers for Medicare and Medicaid Services, national health spending is projected to increase at an average rate of 5.4% per year until 2028, when it could reach $6.2 trillion. HDHPs have their pros and cons, but they’re an excellent way to address high coverage costs. And when you take the time to properly educate your employees — and augment their coverage with a benefit like Paytient — enrollees can take full advantage of everything their health insurance has to offer.

To learn more about Paytient, contact our sales team.

Back to all posts

Do HDHPs Actually Combat the Rising Cost of Healthcare?

When they were first conceived, high-deductible health plans were meant to control the rising costs of healthcare. Although HDHPs can help folks save quite a bit of money, it turns out they might be discouraging folks from seeking important preventive care.

Subscribe to our blog to get the latest updates.